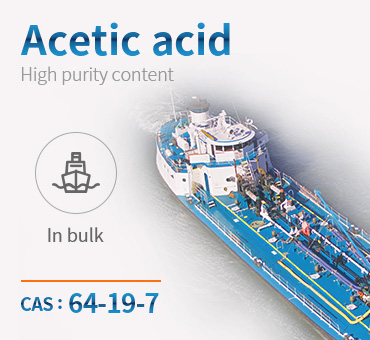 Acetic acid, CH3COOH, is a colorless, volatile liquid at ambient temperatures. The pure compound, glacial acetic acid, owes its name to its ice-like crystalline appearance at 15.6°C. As generally supplied, acetic acid is a 6 N aqueous solution (about 36%) or a 1 N solution (about 6%). These or other dilutions are used in adding appropriate amounts of acetic acid to foods. Acetic acid is the characteristic acid of vinegar, its concentration ranging from 3.5 to 5.6%. Acetic acid and acetates are present in most plants and animal tissues in small but detectable amounts. They are normal metabolic intermediates, are produced by such bacterial species as Acetobacter and can be synthesized completely from carbon dioxide by such microorganisms as Clostridium thermoaceticum. The rat forms acetate at the rate of 1% of its body weight per day.

As a colorless liquid with a strong, pungent, characteristic vinegar odor, it is useful in butter, cheese, grape and fruit flavors. Very little pure acetic acid as such is used in foods, although it is classified by FDA as a GRAS material. Consequently, it may be employed in products that are not covered by Definitions and Standards of Identity. Acetic acid is the principal component of vinegars and pyroligneous acid. In the form of vinegar, more than 27 million lb were added to food in 1986, with approximately equal amounts used as acidulants and flavoring agents. In fact, acetic acid (as vinegar) was one of the earliest flavoring agents. Vinegars are used extensively in preparing salad dressing and mayonnaise, sour and sweet pickles and numerous sauces and catsups. They are also used in the curing of meat and in the canning of certain vegetables. In the manufacture of mayonnaise, the addition of a portion of acetic acid (vinegar) to the salt- or sugar-yolk reduces the heat resistance of Salmonella. Water binding compositions of sausages often include acetic acid or its sodium salt, while calcium acetate is used to preserve the texture of sliced, canned vegetables.

Acetic acid occurs in vinegar. It is producedin the destructive distillation of wood. Itfinds extensive application in the chemicalindustry. It is used in the manufacture ofcellulose acetate, acetate rayon, and variousacetate and acetyl compounds; as a solventfor gums, oils, and resins; as a food preservative in printing and dyeing; and in organicsynthesis.

Glacial Acetic Acid is an acidulant that is a clear, colorless liquid which has an acid taste when diluted with water. It is 99.5% or higher in purity and crystallizes at 17°c. It is used in salad dressings in a diluted form to provide the required acetic acid. It is used as a preservative, acidulant, and flavoring agent. It is also termed acetic acid, glacial.